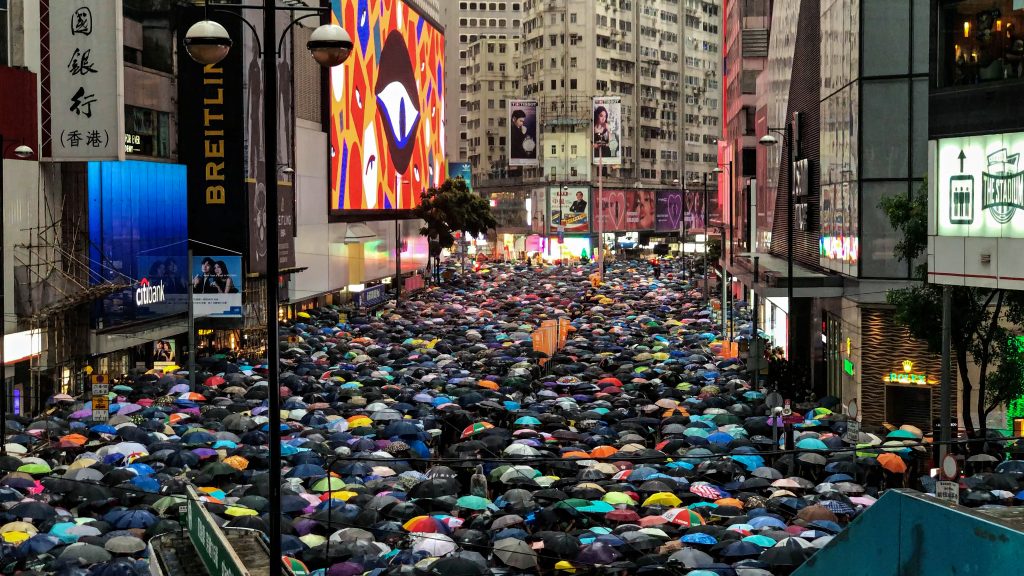 Police brutality in Hong Kong became a global conversation as the story went viral — but a particular type of tweet had more success than others.

When Hong Kong citizens clashed violently with police in the wake of the government’s allowance of extraditions to mainland China, the world watched.

Police brutality in the US, Brazil, Kenya, Chile and Colombia has drawn protest support from all over the globe. In Hong Kong, the repeated use of deployed weapons by police against protesters in the 2019-2020 Anti-Extradition Movement brought the matter to the fore.

To understand the strategies behind viral social media posts surrounding the 2019-2020 Hong Kong protests, we’ve undertaken an analysis — collecting all the tweets that contained #HongKongPoliceBrutality between October 15, 2019 and January 30, 2020 sampling all the English tweets) in a bid to understand what defines viral tweets to mobilise global support.

The tweets that went viral tended to be framed around sympathy, compassion and care, as opposed to tweets driven by other moral values such as fairness and authority. Social media is an emerging, important battleground for protest movements — harnessing its reach has proven crucial for amplifying messages and attracting attention. As Hong Kong showed, utilising these platforms well can place meaningful pressure on political actors to respond — especially if those posts go viral.

The inquiry is guided by moral foundation theory (MFT), a theoretical framework developed based on the assumption that human beings are grouped by judgments about right or wrong, which can lead to political and religious divisions. The evaluation is based on the five fundamental moral values from MFT that influence how individuals make decisions: care/harm, fairness/cheating, loyalty/betrayal, authority/subversion, and purity/degradation

The first moral foundation (care/harm) focuses on intuitions of sympathy, compassion, and nurturance to vulnerable populations, such as children and the elderly. The second moral foundation (fairness/cheating) focuses on the notion of rights and justice — it makes people sensitive to signs of exploitation and motivates them to shun or punish cheaters.

The third moral foundation (loyalty/betrayal) is about forming and maintaining coalitions based on shared identities. It makes people more likely to trust and reward others that they consider as ingroup members, or as one of their own, and thus ostracise those who betray a group. The fourth foundation (authority/subversion) captures the notion of traditional social hierarchies and the need to maintain social order. The last foundation (sanctity/degradation) focuses on spiritual concerns and moral disgust if spiritual values are violated.

In a social movement or digital activism setting, these foundations can take on specific interpretations: care/harm could make people more sensitive to signs of suffering and cruelty, in particular, if vulnerable social groups are targeted.

Fairness/cheating could trigger people to react to signs of injustice, dictatorship, inequality, or the violation of human rights. Loyalty/betrayal could trigger people’s reactions based on their collective identity (e.g., activists, Hongkonger) as an effort to fight against a hegemony party. Social movements often involve challenging power holders and fostering social change. Authority/subversion thus makes people sensitive to transgression (e.g., state repression, abuse of power), and sanctity/degradation has been primarily tied to religious social movements and is used often to justify the purity of a social cause.

Applying MFT to the 2019-2020 Hong Kong protests and police brutality is an  investigation of what specific values in one’s moral system could result in the virality of social movement messages. The study controlled for other factors that may influence message virality, such as who sent the tweet, where the user was located, how long this user had been on Twitter, how many followers this user had on Twitter, and also how many people this user followed on Twitter.

In other words, looking at all the tweets about Hong Kong police brutality, if someone emphasised in a tweet how the abuse of the police force hurt unarmed students (i.e., using the care/harm value to frame the issue), would that lead to more retweets or more likes on Twitter?

Only three moral values were prominent in the tweets: care/harm, fairness/cheating, and authority/subversion. These three moral foundations had distinctive effects on how likely a tweet goes viral.

If a tweet is framed with care/harm, it is more likely to get retweeted or liked. These tweets usually mentioned weapons used (tear gas, gun, pepper spray), vulnerable people (such as students, protesters, citizens), or the act itself (shot, kill, attacked). For example, the following tweet was retweeted 1,747 times:

“@thetimeusedtobe @LIHKGPicks The Chinese University students are facing Hong Kong police massacre, all of them are in very extremely danger situation now.

A close read of the message shows that it highlighted hurting students and putting them in danger.

However, a tweet framed with fairness/cheating is less likely to receive retweets and likes. For example, the following tweet was only retweeted 71 times:

“They are aiming at journalists and reporters. AGAIN. Another proof that Hong Kong has turned into a complete #PoliceState. For shame.

The same negative effect was found from the use of the authority/subversion dimension. For example, the following tweet was retweeted 84 times:

“@business HK Police should be thoroughly investigated by an independent commission chaired by reputable judges from the US/UK reinforced with statutory power to summon and make arrest in order to restore business confidence in #HongKong.”

These lessons matter for grassroots social media campaigns seeking the best way to obtain support on the global stage: the effects of moral values in driving social movement messages virality are not necessarily positive. The moralisation of a social issue (e.g., police brutality) is a complex process confounded with racial and political factors.

The effects are contingent upon audiences who might be divided by their political ideologies. In other words, moral contagion does not happen easily across different social groups on social media. When Twitter is used as a public sphere for debate, it is possible that Twitter users can be divided into pro-democracy, pro-Hong Kong, pro-China, and neutral — the effect of moral framing thus may differ among these users.

Anyone with an account can send a tweet without fact-checking. The example tweets provided above suggest that when audiences read social movement messages, they look for evidence to verify the severity of the violation (such as the use of multimedia or a URL to show photos, videos from offline protests). When weapons and targets were clearly mentioned in a message, anger and outrage are more likely to be triggered.

In the most viral tweets, activists often mentioned politicians, celebrities, journalists, and Western news media agencies to promote their messages. Moral contagion is not the only mechanism to explain how a tweet can go viral. However, by controlling for user demographic information, it was possible to directly assess the direct effects of moral framing.

In a world where social media virality is centered around attention or even sensation, activists may pivot to develop other strategies to mobilise influential accounts for endorsement and support.

Dr. Rong Wang (Ph.D., University of Southern California) is an Assistant Professor in the Department of Communication at the University of Kentucky. Her research examines how to leverage the relationship dynamics among nonprofits, corporations, government agencies, and individual citizens to help solve wicked social issues.

This article was written based on a research article I published with my collaborator, Dr. Wenliu Liu, who is an Assistant Professor of Strategic and Organizational Communication at the Jack J. Valenti School of Communication, University of Houston.