India’s overt and covert chilling of press freedom 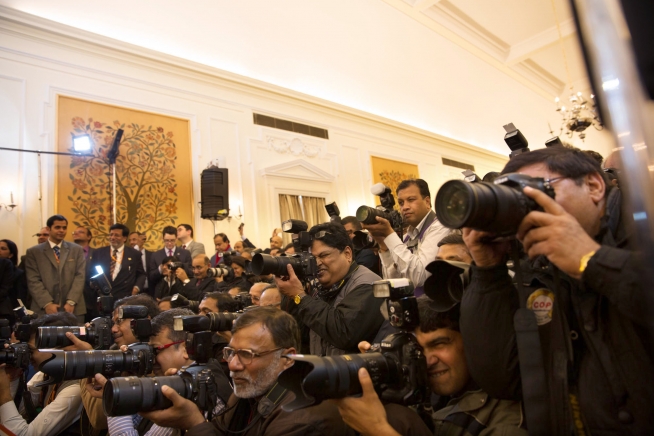 The Pegasus spyware scandal triggered more questions than answers about how long the Indian government has been weaponising social media data.

Of the 50,000 mobile phones hit by the Pegasus spyware scandal, it was revealed last year some 1,000 belonged to journalists, civil rights activists and public figures in India. Another 800 or so were from the neighbouring state of Pakistan, according to The Wire.

Pegasus, Israeli software intended to help government agencies fight terrorism and crime, was reportedly being used by governments around the world to spy on people for reasons unrelated to national security. The developer of the software, Israel’s NSO Group, has pleaded innocence. The agencies deploying the snooping software remain mostly unidentified.

Now, more than five years after India is believed to have contracted to acquire Pegasus, a committee headed by a retired judge of India’s Supreme Court, and comprising three technical experts, will inquire into the Pegasus allegations.

Caught in Pegasus’ web in India were two founders of The Wire (an independent Indian media outlet), an editor engaged in the specialised field of diplomacy and at least three frequent contributors, along with reporters and commentators on strategic affairs from India’s most important daily newspapers.

Other targets included journalists reporting from some of India’s most conflict-prone zones, such as Kashmir, the north-east, and the states subject to left-wing insurgencies, such as Chhattisgarh and Jharkhand.

Rajeev Sharma, a freelance reporter on defence and strategic matters, was arrested in September 2020 on charges of espionage. His name had earlier been revealed to have been on the surveillance list. In December 2020, he was granted bail after the police failed to file a case against him. In July 2021 he was arrested on charges of money-laundering by an agency tasked with the investigation of financial crimes. He was granted bail by the Delhi High Court in January this year.

Though the fact of surveillance was established beyond ambiguity, there has been little clarity on how long it has been carried out.

In testimony before a committee directed by the Supreme Court to probe the surveillance scandal, investigative journalist J. Gopikrishnan, himself a target, spotted a line item in the Indian government’s 2017-18 budget as the probable giveaway. The National Security Agency, headed by a person believed to enjoy the Prime Minister’s absolute confidence, gained an increased budgetary allocation of ₹3 billion (roughly US$44 million) that year, for the declared purpose of “cybersecurity”.

In 2019, the firm that owns the instant messaging service WhatsApp detected the use of Pegasus in a hack of user accounts. It has since sued the NSO group in a matter that is yet to be decided. The Indian government in 2019 confirmed the infiltration of some WhatsApp accounts but provided few additional details about how it intended to deal with the breach of user privacy.

In an intervention in Parliament soon after the 2021 revelations, India’s Minister for Information Technology, himself believed to be on the hack list, rejected them as utter falsehoods. He said surveillance operations in India were carried out for legitimate national security purposes, after securing all necessary clearances. The story of unauthorised surveillance was, he asserted, part of a conspiracy to defame India’s robust democratic practices. In the days that followed, that narrative was faithfully amplified by a chorus line of ruling party functionaries.

But it has been known since the 2014 election that brought it to power, that the ruling Bharatiya Janata Party (BJP) runs a tightly organised influence operation on social media.

Since assuming office, the Modi government has made at least seven separate attempts to set up an agency with the mandate to monitor citizens’ social media activity and where possible, influence public attitudes. Nuthalapati Venkata Ramana, Chief Justice of India, has spoken in the context of Pegasus of the “chilling effect” that snooping techniques may have on press freedom, and the importance of the protection of journalistic sources in a democratic society.

The Modi government’s ambitions of total control through network connectivity is a dream that dies hard. It is obvious now that alongside the overt efforts at securing that objective, a covert process has been underway for longer than anybody has yet been able to assess.

Sukumar Muralidharan is Professor in the school of journalism at the O.P. Jindal Global University, Sonipat. He has been a print media journalist and a Fellow at the Indian Institute of Advanced Study, Shimla. He declared no conflicts of interest in relation to this article.

Media systems have no answer for toxic polarisation. The development of a public-service internet and public-service media needs to be on the agenda.

Journalists are some of the most active users of Twitter. But steps to make it a platform for unregulated speech threatens to turn a tool into a tribulation.

Migrant workers keep the Malaysian economy humming during peak times. But when times got tough, they were scapegoated.

Duterte’s presidency rapidly eroded press freedom in the Philippines. Media organisations see the May elections as a chance to set things right.

Media in the Philippines bite back against Duterte

Already under fire from the Digital Security Act, Bangladeshi journalists face even worse censorship if a new piece of legislation gets up.

Authoritarian governments have weaponised online tools and platforms to control journalists and stifle freedom of expression.