India’s history holds the answers to its democratic future 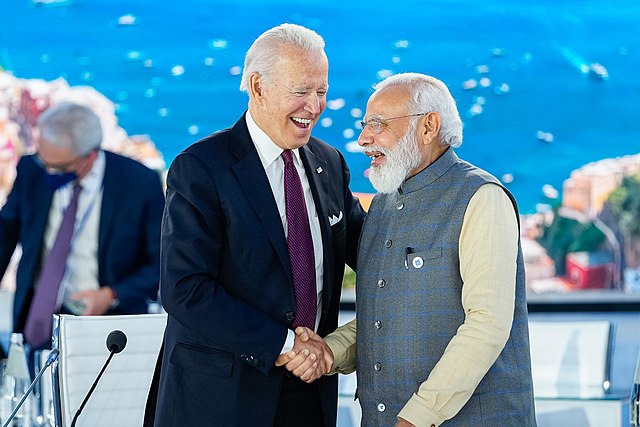 Indian Prime Minister Narendra Modi is invited to the ‘Summit for Democracy’. (Office of the President of the United States, Wikimedia Commons) : Reece Hooker, 360info

The rich and resilient history of Indian democracy offers lessons for the participants in the ‘Summit for Democracy’, but its present may serve as a warning.

The rich and resilient history of Indian democracy offers many lessons for the participants in US President Joe Biden’s online ‘Summit for Democracy’, but its present may serve as a warning.

India’s competitive authoritarian turn since 2014 reflects the ruling Bharatiya Janata Party’s (BJP) political propensity to deploy the electoral power of incumbency to gradually weaken opposition and the institutions of democracy.

Not only has India declined in democracy rankings, 83 members of the Constitutional Conduct Group comprising non party affiliated senior retired civil servants and judges bemoaned India’s poor performance in democracy rankings and in the rights of women and religious minorities. The comity of nations, global civil society and the media can play a role in consolidating the substantial home-grown forces of democratic resilience.

Prime Minister Narendra Modi’s government has rolled back democracy in three ways. First, wherever possible, rules were interpreted differently to project a new morality. Second, where rule change was necessary, incremental changes were made to reflect a new moral purpose. Finally, where political opposition was weak, legal frameworks were radically changed to reflect a new purpose.

Modi’s Hindutva brand of Hindu nationalism is the driving force, seeking to perceptibly transform the secular and plural India into a hegemonic nation of majority ethnic Hindus.

Hindutva assumed unparalleled power when Modi’s right-wing Hindu nationalist BJP came back to power with an absolute majority in 2019, after governing since 2014. The BJP won 303 of the 542 seats. The next party secured just 52, three seats less than the minimum required to appoint a leader of the opposition. A weak opposition has enabled  the Hindu nationalist wave.

Modi has consolidated his power by transforming Parliamentary procedures. In 2019 and 2020, it became standard practice for the government to surprise the opposition with new bills, passing legislation with their majority before it could be properly debated in Parliament.

Civil society and opposition parties were also targeted by gradual regulatory changes. Electoral bonds were introduced in 2018 to enhance the ruling party’s electoral resources under the guise of increasing transparency, against the wishes of the Reserve Bank and the Election Commission.

Three quarters of the US$457 million in electoral bonds purchased in 2019-20 went to the BJP. But no one can tell who purchased these bonds. The next party — the Indian National Congress — received only 9 percent. Access to resources impacts Indian elections.

The Unlawful Activities Prevention Amendment Bill (UAPA) builds on legislation deployed against terrorist groups, making it easier to detain people  without charge. It was used to detain activists such as Gautam Navlakha, Binayak Sen, Sudha Bhardwaj, Anand Teltumbde, Khurram Parvez and Stan Swamy, among many others.

Non-governmental organisations were directly targeted by a 2020 amendment to the Foreign Contribution Regulation Act (FCRA). This Act works far more effectively deployed against foreign funded non-governmental organizations (NGOs) — Greenpeace and Amnesty had to severely curtail operations even before the Act could be  deployed against them. The FCRA is a powerful tool that empowers the BJP’s social arm — Rashtriya Swayam Sevak Sangh — against its enemies in civil society.

Finally, laws were changed where opposition was weak to make old morality look immoral as well. Majoritarian politics were engaged, swiftly passing bills to convert the special state of Jammu and Kashmir into two Union Territories by repealing Article 370. The state’s legislative assembly was suspended and the top leadership was incarcerated.

This is a complete reversal of a moral and constitutional commitment. The majoritarian wave was deployed to convert a special state into centrally administered union territory without much political opposition. Jammu and Kashmir is the only Muslim-majority state in India.

The story of India’s democratic resilience lives on, despite these attacks on the fabric of India’s democracy. On Nov. 19, 2021, Modi agreed to repeal the three farm laws that farmers from the green revolution states had opposed for a year. Farmers feared these laws would signal the takeover of farm produce by corporations who would not provide adequate compensation.

The effectiveness of a social movement, despite attacks on activists and NGOs, reveals how resilient India’s civil society can be. The voting power of farmers was hard to ignore on the eve of February 2022 elections in Uttar Pradesh, India’s most populous state. In 2021, the BJP lost elections in West Bengal, Tamil Nadu and Kerala.

How can the forces of democratic resilience be empowered? The first response has to come from activists and politicians who believe in an alternative India, which can remain a pluralistic democracy. That idea was much better organised within a well-funded Indian National Congress, whose workers penetrated the poverty-stricken masses with a zeal to uplift them through participation.

Can the Congress and other opposition forces cultivate that cosmopolitan culture and create an alternative cadre — the likes of which had secured India’s freedom from colonial rule? Such an approach to dealing with society will strengthen the forces of politics away from Hindutva nationalism.

Media and world opinion had supported India’s non-violent non-cooperation as an emancipatory route. The association of states, as well as the global civil society, could remind India that its own cultural resources can provide possibilities for humanity at large. The world’s most populous democracy should not forget that it  once astonished the world by remaining democratic despite being poverty-stricken.

Rahul Mukherji is a Professor of Politics and Executive Director at the South Asia Institute, Heidelberg University.

Dr. Seyed Hossein Zarhani, Lecturer and Research Fellow at the South Asia Institute, Heidelberg University, served as an advisor for this contribution.