Are our homes burning the forest? 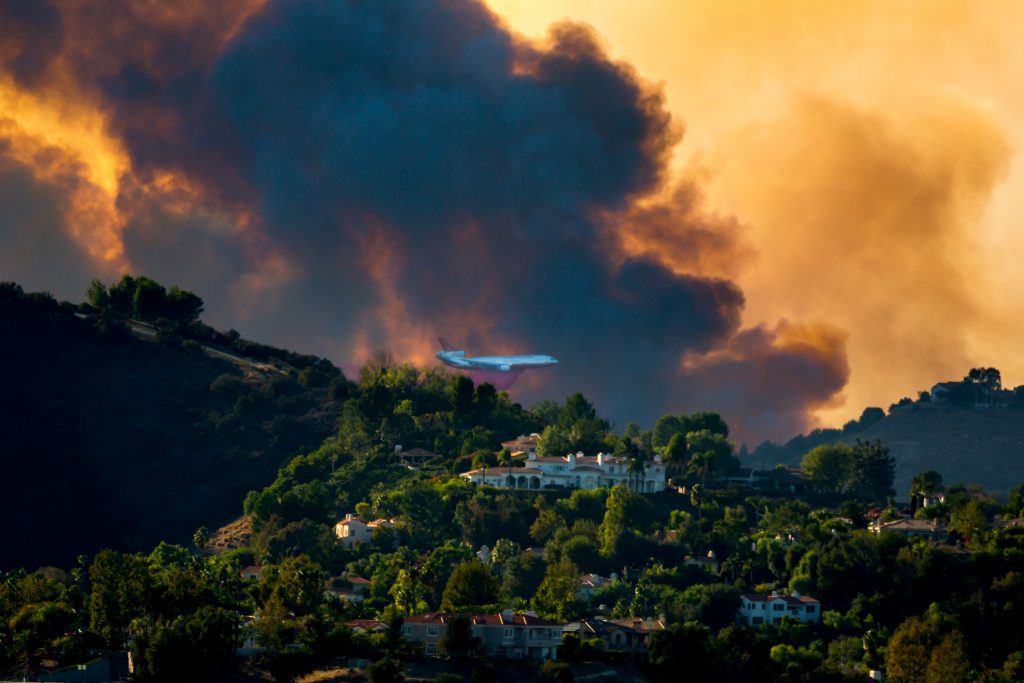 Urban development in the hills of California is at extreme fire risk. : Peter Buschmann for United States Forest Service

With urban development where wildfires have raged, conflict seems inevitable. Is there a better way?

Californians probably never realised – perhaps even to this day – how close a 2007 wildfire came to destroying a significant portion of San Diego. Hot, dry ‘Santa Ana’ winds, combined with heightened seasonal drought conditions in the region, led to the outbreak of two powerful conflagrations: one in the suburban hills of northern San Diego county, the other to the south along the US-Mexico border near the town of Tecate. The event was unlike previous wildfires in the region – it was poised to become an ecological catastrophe.The state’s second most populous urban region might have been deeply wounded; powerful winds were thrusting the firestorm directly toward the city centre.

Thick smoke and ash made it difficult to breathe; residents across a region with more than 3 million inhabitants were advised to stay indoors. City and county officials evacuated thousands of citizens. Tens of thousands more had their bags packed, valuables in their cars, ready to flee.

On the Mexican side of the border, more than 60 square kilometres of land was burning near the cities of Tecate, Tijuana and Ensenada. This wildfire was now both a regional and international emergency, and was spreading south of the border.

On the third day, by chance, winds shifted to the south and later toward the east, slowing the wildfire’s path toward the urban centre. Once the wind direction changed, it carried more humidity from the Pacific Ocean, giving firefighters a chance to control the crisis.

In the decade and a half since the 2007 San Diego wildfires, California has seen an alarming spike in wildfire outbreaks, directly tied to global warming. Ten of California’s most destructive wildfires have burned since 2015. These include the Camp Fire of 2018, in central California, which led to 85 deaths; the 2017 Thomas Fire which burned over 1,100 square kilometres of land in Ventura and Santa Barbara counties; and the 2018 Woolsey Fire in Los Angeles, with a total of over 380 square kilometres burned and 1600 structures damaged or destroyed. The year 2020 was a frightening reminder, with a series of large-scale wildfires up and down the state, including the North Complex, August Complex, and LNU Lighting Complex fires in northern and central California; these burned over 4,000 square kilometres of land. Then, in July 2021, the Dixie, KNP Complex, Caldor and Monument fires burned thousands more square kilometres in northern and central California.

The 2007 wildfires and the conflagrations since could have been a huge wake-up call about the dangers of San Diego’s emerging suburban settlement pattern, its connection to the natural ecosystem and to the ecology of wildfire. But, to this day, it seems the lessons are yet to be taken seriously.

Southern California has continued to be one of the fastest growing metropolitan regions in North America over the last four decades. Indeed, while most counties in the US saw their population shrink, between 2010 and 2020, southern California’s counties all experienced significant growth — as high as 10 percent in Riverside county, or seven percent in San Bernardino.The San Diego metropolitan area has kept pace. Even though land shortages and high housing costs have slowed growth, San Diego’s 2020 population of 3.4 million is expected to increase to 3.8 million by 2035. But for more than three decades, there has been almost no recognition among developers, or even government, of the risks of wildfires and the fragility of inland southern California’s arid ecosystem.

Most of the urban growth will occur in the eastern fringes of the region, in an arc of suburban growth of inland cities and towns – what locals used to call the ‘back country’, and what ecologists now term the ‘wildland-urban interface’. The limited supply of land along the coast for development, especially within the city of San Diego, has added pressure to build inland. This trend has been further exacerbated by greater homebuyer interest in larger homes on larger lots.

This suburban growth pattern has unfolded without considering the implications of poorly managed, low density sprawl-type growth in a semi-arid region where wildfires are part of the natural ecological cycle. Three out of four homes built in San Diego since 1990 are in the wildland danger zone that lies between coastal foothills and mountains further inland.

Indeed, this pattern is symptomatic of a larger growth culture where super-sized metropolitan regions are being constructed over desert terrain and semi-arid regions along the southwestern US border with Mexico.

The destruction of agriculture has been put forward as a partial explanation of the wildfire crisis in San Diego. In the past, orange, lemon and avocado groves were de facto firebreaks for seasonal wild conflagrations. But global warming poses more significant problems: rising temperatures and decreasing rainfall that create conditions for larger-scale wildfires than normal.

The natural ecology of wildfires has been disturbed; wildfires in a climate changed San Diego interior will burn hotter and spread faster. Increasingly, higher temperatures combined with dry, hot Santa Ana winds are producing a landscape that is riper than ever for more devastating wildfires.

Yet, perhaps the least noted part of changing wildfire ecology lies in the flammable nature of suburban sprawl in the southwestern United States. Mass-produced suburban developments are poorly adapted to the dry ecology and wildfire regime of the region. Buildings become the ‘fuel’ that causes wildfires to spread and burn in more intense ways than ever before.

Both the scale and form of cookie-cutter suburbs work against wildfire safety. Wildfires burn intensely and are driven by high winds that make them spread in unpredictable ways. When tens of thousands of flammable homes are dispersed at consistent densities along the edges of cliffs precisely where the fire arrives when winds blow from the east, it creates the ingredients for much larger scale wildfires, and much more extensive damage.

Fire ecologists believe an important factor in the proliferation of wildfires in the San Diego region is the way houses are sited, designed and built. Most homes lack what is called ‘defensible space’ – cleared swathes of land free from flammable vegetation.

Not only are too many homes being built in the arc of wildfire country, but developers often don’t consider the way fire moves through natural landscape in creating site plans and community designs. Developers purchase blocks of land, then bring in giant earth-moving machines to level off the topography. They then plunk down cul-de-sac type subdivisions on top of the levelled-off hills and mesas, whose layout seeks to maximise views of the wilderness.

Developers generally regard canyons as an open space amenity. But canyons can become wildfire heat funnels during the autumn Santa Ana conditions. When housing is constructed up against natural canyons, and even worse, along the edges of cliffs overlooking steep slopes below, the danger is even more pronounced. That’s because wildfires typically advance rapidly up hillsides, fed by flames that grow stronger as they reach the tops of hills. Houses sited at the top of sloped hills are immediately engulfed, and end up increasing wildfires’ heat level, causing them to spread with more power and volume. From a site planning perspective, homes in suburban developments should be located to avoid natural ‘fire chimneys’ such as canyons, saddles and slopes.

Suburban building designs have often fed wildfires, too. For many decades, suburban homes were built with wooden shingle roofs, which easily ignite when wildfires shoot sparks into the air. Studies have shown that homes with wooden roofs are 21 times more likely to burn than a home with a non-wood roof; homes made of less flammable material, such as stone, brick or concrete block, always withstand wildfires better.

Some fire experts note that in nearby Baja California, just south of the Mexican border (a region with the same ecology), considerably less damage occurs from wildfires. They believe this pattern is attributable to a culture that allows more natural burns than north of the border. It may also be the case that when wildfire enters urbanised areas, it encounters Mexican homes built from reinforced concrete, or pre-fabricated stone and tile, slowing down the spread of the fire.

Rooflines, reduced eaves, double-glazed windows, non-flammable shutters, and even swimming pools are construction details that can further limit the spread of wildfires in urbanised zones. As noted above creation of a green belt of 30 metres around a home where fuel sources (shrubs, trees, grasses) are thinned out keeps the fire from burning hotter, from entering the home itself, or spreading faster to surrounding houses.

Developers might believe that defensible space is the ‘magic bullet’ solution, freeing them to build low-density suburbs anywhere. In fact, defensible space designs will only work if combined with site planning, zoning that prevents dangerous developments along canyons and near east-facing slopes, and better coordination of local fire-fighting capability with land use and traffic circulation plans.

Public policy makers and the media have often responded in a knee-jerk manner to wildfires in the suburbs. Lumping fire into the category of ‘natural disasters that are inevitable’ – like hurricanes or earthquakes – leads to the conclusion that wildfires must be addressed with better equipment and coordination between different government agencies, and efficient evacuation plans.

Perhaps it is easier and safer to blame the problem on vegetation or equipment or even on the firefighters themselves, than it is to step back and question the pattern and scale of urban growth itself.

The question we should be asking is whether the forest is burning our homes or our homes are burning the forest.

Solutions: Plan and zone safe environments to live in

Here are a few policy suggestions for the future.

Lawrence Herzog is a writer, and lecturer in the Department of Urban Studies & Planning, and Designer-in-Residence at the Design Lab, University of California, San Diego. He is also professor emeritus of city planning in the School of Public Affairs at San Diego State University. He is author/editor of 11 books on urban planning, including: Global Suburbs: Urban Sprawl from the Rio Grande to Rio de Janeiro; Return to the Center; and From Aztec to High Tech.