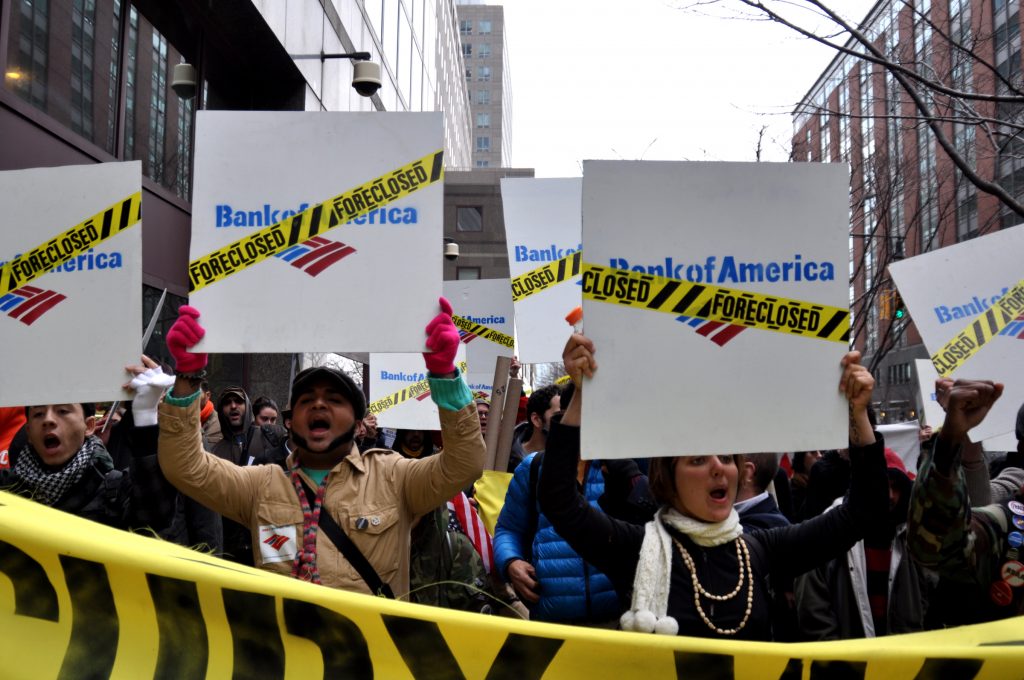 The latest iteration of global protest transcends lines of class and race, but hasn’t always translated to concrete policy change.

The face of protest continues to evolve. The early 20th century was the ‘Age of Revolution’, producing a prototype for radical societal transformation aimed at large-scale change. The latter part of the century saw single-issue ‘New Social Movements’ grow, such as feminism and anti-racism. Since the turn of the millennium, contemporary protests have moved to a new era — global movements that transcend lines of class and race.

The 2011 Occupy Wall Street (OWS) demonstrations in the United States, the 2011 Arab Spring in Egypt, the 2013 Brazilian Spring in Brazil and the 2012 anti-corruption movement in India are among the most visible turning points in this trend.

Despite fizzling out well short of their revolutionary ambitions, these movements have helped define the changing nature of public protests.

Alliances were forged that brought together class divides, shifting the focus of protests away from class and identity politics and towards alliances between people of different classes, castes, and races.

Protests in Brazil brought together those from the favelas (slums), students and youth from lower-middle classes, as well as the members of the social elite and the white upper-middle classes.

The urban poor, including auto-rickshaw taxi drivers and those employed in the unorganised sector were joined by film stars, intellectuals and business leaders in the India against Corruption (IAC) protest in New Delhi.

Narratives around corruption, representation and nationalism allowed different sections of society to connect with the protests and come together, despite their social and economic differences.

But despite their significance, the protests resulted in little tangible change in policy or conditions. OWS failed to change the behaviour of financial institutions, the Brazilian Spring never arrived, regimes changed broadly for the worse after the Arab Spring, and anti-corruption protests in Delhi did not see India’s officialdom turn over a new leaf.

The protests were high on symbolism and symbolic communication. The slogans of OWS — “demand the impossible” and “We are the 99 percent” — were catchy, but the group presented no concrete demands. It remained a movement against corporations, with no platform to address student debt, homelessness or corporate misbehaviour.

The protesters themselves have offered reasons why this was the case. Some felt the “consensus model” of decision-making made it difficult to formulate a concrete agenda. Many others felt OWS was not meant to achieve policy change, but create a dialogue and bring back ‘associational life’, a founding principle of American democracy.

Some felt that OWS achieved something much larger than policy-oriented demands: it changed the ‘imagination’ of society, persuading people to ask questions about self-representation. OWS was imagined as a protest in symbolic communication, creating identification between social groups that knew little about each other.

For instance, an organiser in Brooklyn who was an early career college lecturer, argued OWS was structured around categories of ‘shame’ and ‘dignity’, which created an equivalence between students suffering the shame of their debt with the indignity of the homeless and the unemployed.

Black Lives Matter activists who participated in OWS said the movement helped a younger generation of white Americans witness black activism for the first time, developing their understanding of issues such as racial profiling.

The Brazilian Spring began as a “free fare movement”, demanding lower public transport fares, but grew into a larger campaign for anti-corruption, welfare, public education and affirmative action. Later, the MTST movement (Movimento dos Trabalhadores Sem Teto, or Homeless Workers Movement) for housing joined the free fare protesters. Eventually, the protest split between the lower echelons demanding action on welfare, while social elites focused on corruption and a narrative of nationalism, demanding the impeachment of the President Dilma Roussef.

Many, mostly students who benefitted from former President Luiz Inácio Lula da Silva’s affirmative action policies, felt it was foolish to spend taxpayers funds on the 2014 FIFA World Cup while people suffered with basic needs, which had sparked the protests.

Most students who felt this way articulated their ideas along ideological lines, but agreed there was a need to think afresh about the organisational forms of the protest. In the end, Brazil too saw no policy-related change from the protests. This was mostly attributed to the fact that the protests could not hold people from different segments of society together.

IAC began in Delhi, demanding new anti-corruption legislation and a statutory body referred to as the Lok Pal or Ombudsman. Corruption and democratic representation were the key framing narratives of the protest.

It began with the issue of the “coal scam” (discretionary allocation of coal deposits to public and private companies by the government) and then moved on to calls for electoral reform. In particular, the bribing of voters with cash and liquor during campaigns. It invoked ideas of direct democracy, and the “right to recall” elected representatives if they under-performed.

Nationalism was a framing narrative, invoking national symbols. While none of the demands led to any concrete outcome, IAC did facilitate the formation of a new political party in Delhi called the Aam Admi Party (meaning the Common Man’s Party), which went on to win the legislative elections in Delhi. The Aam Admi Party formulated social democratic policies that included Mohalla (neighbourhood) clinics, supply of free electricity and water in slums and the introduction of new infrastructure in government-run public schools.

Following all three movements, each country elected a pro-corporate, right-wing government — Donald Trump in the US, Jair Bolsonaro in Brazil and Narendra Modi in India. Each leader elected in the wake of the protests pursued neoliberalism much more aggressively than the preceding regimes. How global protest movements next evolve may play a role in determining what happens afterwards.

Ajay Gudavarthy is an Associate Professor at the Centre for Political Studies, at Jawaharlal Nehru University, New Delhi, India. His recent publications include India after Modi (2018) and edited Secular Sectarianism (2019). He is currently Associate Member, Institute for Humanities, Simon Fraser University, Canada.

This article is based on the fieldwork by the writer as part of an international project titled `Democracy and Post-Civil Society in Global Politics. The project was funded by the Indian Council for Social Science Research, New Delhi. Sajjan Singh in India and Ulisses Terto in Brazil assisted in field interviews.