How victims can pay polluters for a win-win result 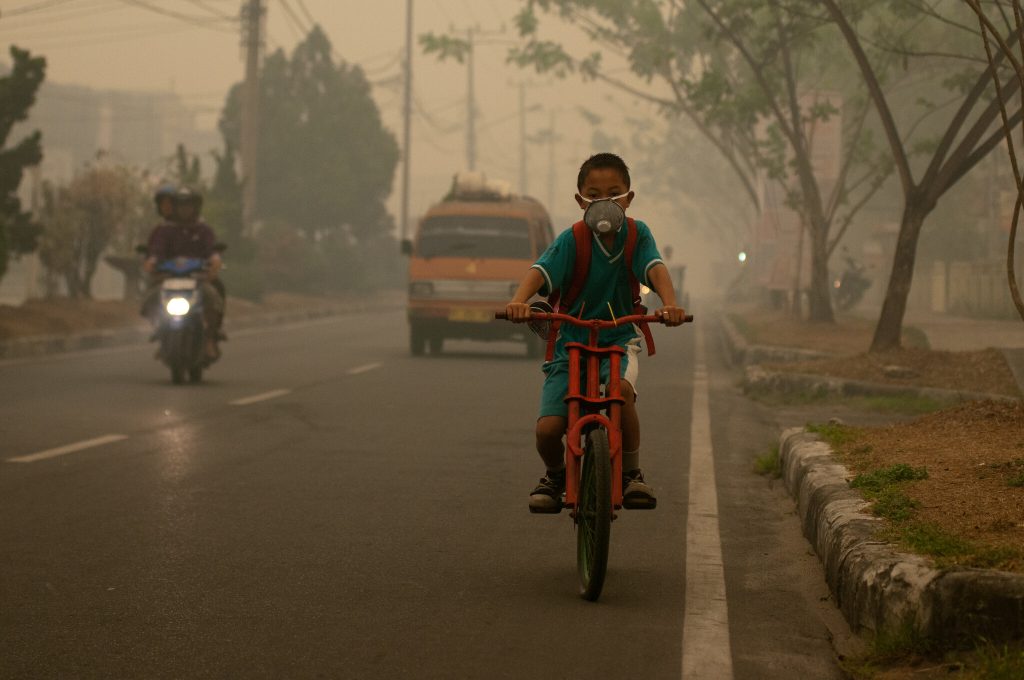 With smoke haze posing a significant pollution issue in Southeast Asia, a victim-pays approach could result in cleaner air for all.

The dry season is the period for slash and burn in Southeast Asia. Each July to October, smoke from agriculture and clearing of forests chokes not only the countries burning (mainly Indonesia), but also neighbouring countries, Singapore, Malaysia, Brunei, and Southern Thailand. Forest fires and smoke haze in Southeast Asia have, over the years, resulted in serious health risks, environmental damage and economic ramifications well beyond borders.

Fining the perpetrators is risky. Boycotts of haze-linked products such as palm oil penalise well-behaved plantations as well as errant ones.

What if, instead, the victims were to pay? Paying polluters to adopt fire-free land clearing practices could be the economic solution the region needs. Particularly if countries were willing to overlook narrow national interests and acknowledge the transnational effects of haze on economies and societies.

Preventing the economic consequences of forest burning is among the many activities undertaken by developed countries and international institutions like the World Bank, the Asian Development Bank and the Asian Infrastructure Investment Bank under the label of development assistance.

If those wanting a haze-free life contributed financing, farmers and plantations would find it possible to ditch slash and burn. Payments could be used to fund appropriate land-clearing equipment, and financial incentives and disincentives to small landholders to adopt land-clearing practices without the use of fire. Funding and fund transfer among the stakeholders could pay for fire monitoring and prevention activities in a bid to control and influence the polluters.

On the other side of the ledger are the many tangible and intangible costs associated with transboundary haze. The tangible costs of haze pollution include health costs, productivity loss due to restricted activity days, loss of tourism and its knock-on effects, and the cost of mitigation and adaptation by government agencies and households. Intangible costs may be difficult to measure but nonetheless have a real impact on society, such as general discomfort suffered by the public and loss of enjoyment of outdoor activities.

It may seem unfair — extortionate even — to ask the victims to pay to avoid being harmed. But realistically, many in Southeast Asia may be willing to pay to end the annual haze.

A central tenet of welfare economics sees welfare enhanced if those who are better off can compensate those who lose and still be better off.

The cost of controlling the haze pollution could be shared by the victim nations in proportion to the damage they experience from the pollution. Game theory could be used to set the rules so no country would be tempted to walk away. In 2004, it was suggested that 93.8 percent of the victim damages were in Indonesia, 5.1 percent in Malaysia and 1.1 percent in Singapore. A calculation of the tangible and intangible costs of the haze impacts amounts to about S$1.83 billion (US$1.2 billion). If the costs of direct fire damages in Indonesia were factored in as well, the relative proportions of victim damages suffered by each country could then be calculated by dividing the total damage costs to each country over the total costs of forest fires and haze to the region. Therefore they should contribute approximately US$1.125 billion, US$61.2 million, and US$13.2 million a year, respectively. This method only works if the amount paid is less than or equal to the harm suffered. For example, if the cost of reducing land-clearing activities is lower than the cost of the fires for its own country, Indonesia could manage the fires themselves.

International expertise and financial support could improve environmental conditions in Southeast Asia, saving the region’s countries billions of dollars while modernising production methods used primarily by small landholders. The benefits of transforming the agricultural sector in Malaysia and Indonesia might deliver spinoffs to other sectors in the economy including agricultural machinery. Over the long term, the health benefits might be considerable and lead to an improvement in the sector’s image.

Another source of transboundary haze mitigation funding might be ordinary people who are willing to pay for not enduring pollution. In 2018, a willingness-to-pay survey found that, for a one-month haze episode, Singaporeans were willing to reach into their own pockets for approximately S$51.31 if it meant the skies remained haze-free.

Calculating the cost of Southeast Asian haze in victim countries would help each country to better decide whether and how much aid to offer Indonesia, and how best to assist sectors hurt by the haze. Balancing the costs of haze pollution damages and the costs of spending on controlling and reducing these damages is important for policy decisions both internationally and locally.

Euston Quah is Albert Winsemius Chair Professor of Economics, and Director, Economic Growth Centre at the Nanyang Technological  University, Singapore. He is also president of the Economic Society of  Singapore.