How not to build a tourism city 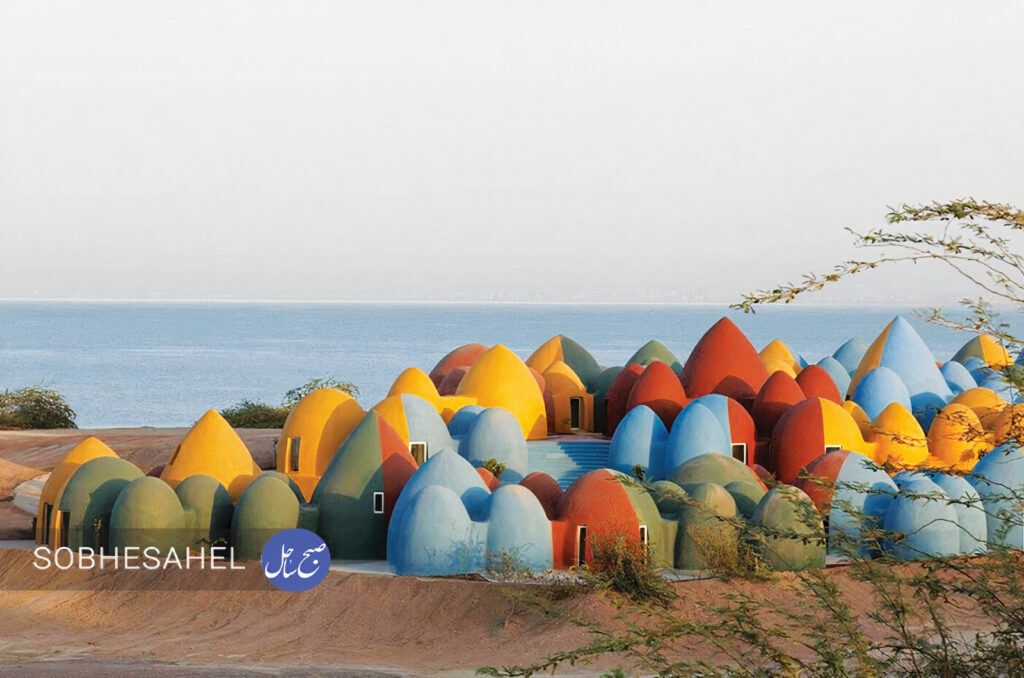 The Majara tourism development in Hormuz has been heavily criticised. : Shaqayeq Partow Photo supplied by the author

Despite its aesthetic appeal, the Iranian resort Majara is poised to be a sore point among local residents.

Looking at the 200 vibrant oddly-shaped domes might make you feel you’re on a Wes Anderson movie set.

Located at Hormuz (or Ormuz) Island, a historic port off the southern coast of Iran, the project is designed to attract tourists to the small island and serve as an alternative to high-rise developments traditionally used to house visitors.

Presence in Hormuz 2 is a series of urban development projects designed by the Tehran-based ZAV Architects. Majara (which means adventure) is the second phase of this multipurpose cultural residence, aimed at binding together the lives of local people and visitors culturally and economically.

On the verge of opening, this project has been heavily criticised by environmental activists and urban experts citing ecological, economic, cultural and social concerns. Such projects have made locals mere servants in service of investors, which impedes the enhancement of their quality of life.

Although Iran was never colonised, Hormuz Island attracted much interest from colonial powers due to its strategic place on the trade route between Europe and India.

The Portuguese captured Hormuz in 1507. Their presence was all about gaining supremacy over maritime routes rather than colonial domination. The most important long-term contribution of the Portuguese in Asia was identifying and mapping out strategic chokepoints.

The Strait of Hormuz is still one of the world’s vital maritime chokepoints, with almost a fifth of global oil supplies passing through the waterway. Given its significance in delivering the world’s energy needs, this strategic maritime route recently focused on new construction project plans.

Islanders struggle economically which has driven them to be involved in smuggling so direct engagement with them in tourism projects and urban policy-making is crucial.

One of the reasons for the influx of government-related entities and investors to the island is the emphasis on its development in recent years. But projects have been beset by problems.

To make way for tourism and construction projects, locals are evicted from their homes. A residential development has ceased due to a land dispute between the municipality of Hormuz (the owner) and the office of the Ministry of Road and Urban Development (MRUD) (the developer). A Ministry representative denies this, saying the lands are owned by the government. These contradicting statements reveal the convoluted status of land possession in Hormuz.

The Majara project has been controversial from the start. Despite its architectural merit, there have been bigger environmental and ecological concerns left unanswered by the developers while critics have targeted the cycle of dispossession and land grabs.

In an interview, Pouria Jahanshad, a researcher of art and critical urban studies, criticised the secretive development of the project. The Majara residence is one of three developments on Hormuz Island still unfinished. Two other projects are rapidly progressing under the radar, with little to no information on the developer or other aspects of the developments.

In addition to these, the Majara developers own various other buildings and lands in the island’s north, including a mine of the island’s famous “red soil”.

While the developers have claimed the project has focused on local participation, community empowerment, and infrastructure development, it’s unclear whether this has happened. To encourage confidence in the project, everyone should have access to the documents on the process of plan development.

One event highlights the use of public funds for private gain. The “Soil Carpet” event in which a ‘carpet’ made from red soil was created on a site adjacent to the Majara and ended up becoming a symbol of the privatisation and dispossession of coastal lands. In this sense the “collusion” of forces behind the promoted vision were easily identified: those who control the island’s exports, those involved in the privatisation of lands and those who plan and construct the megaprojects. This was where art and commerce intersected to the detriment of the local population.

Jahanshad said the lack of political establishments and the unwillingness of the central government to grant such rights has exacerbated the island’s economic and political development status. Jahanshad argued that the issue is not the lack of expertise as such; it is how that expertise is conceived as a tool in the hands of the power holders. The problem arises when the so-called design experts are more concerned with aesthetics. The experts prioritise profit over providing a conducive and sustainable living environment for the island’s residents.

The Hormuz community has not seen a single benefit from the exploitation and export of red soil mines, so there were always questions as to how tourism might benefit residents. The tourism boom could actually lead to higher rents, and more expensive property and thus threaten the locals’ livelihoods.

Building these large-scale tourist projects on Hormuz Island has endangered the citizens’ right to the city. The people whose island has no more land to occupy are being pushed out by non-residents. Such top-down development projects only deepen the crisis of inequality and deprivation on an island incessantly hit by power and water supply shortages. Even simple healthcare amenities in Hormuz are scarce.

These developments may lead to an appealing facade but would by no means help alleviate poverty and deprivation on the island. Hormuz residents need new tools to acquire economic, cultural, and political power to stop the vicious cycle. Such investments and developments should be properly regulated either by the local community or non-government bodies to supervise the wealth distribution process.

Mahziar Mehan is a researcher in urban planning at the School of Urbanism, University of Tehran and Municipality of Tehran, Iran.

Pouria Jahanshad, an educator and researcher in critical urban studies and contemporary art contributed to this article.

Acknowledgement: Please note that parts of this interview in Farsi have been published in Sobhe Sahel News.